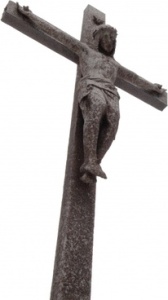 12 On the next day much people that were come to the feast, when they heard that Jesus was coming to Jerusalem, 13 Took branches of palm trees, and went forth to meet him, and cried, Hosanna: Blessed is the King of Israel that cometh in the name of the Lord. 14 And Jesus, when he had found a young ass, sat thereon; as it is written, 15 Fear not, daughter of Sion: behold, thy King cometh, sitting on an ass’s colt. 16 These things understood not his disciples at the first: but when Jesus was glorified, then remembered they that these things were written of him, and that they had done these things unto him. 17 The people therefore that was with him when he called Lazarus out of his grave, and raised him from the dead, bare record. 18 For this cause the people also met him, for that they heard that he had done this miracle. 19 The Pharisees therefore said among themselves, Perceive ye how ye prevail nothing? behold, the world is gone after him. (John 12:12-19 KJV)

14 Then one of the twelve, called Judas Iscariot, went unto the chief priests, 15 And said unto them, What will ye give me, and I will deliver him unto you? And they covenanted with him for thirty pieces of silver. 16 And from that time he sought opportunity to betray him. (Matthew 26:14-16 KJV)

Judas was a very conniving man that was tolerated by all yet, at the same time, hated by many. A conniver, at times, serves a purpose, like a politician. We have all either met, truly know or cohort with a conniver. We may (I’ll bet money on this) even be a conniver ourselves. Everything we do or say have some form of hidden agenda within the makeup of whatever innocent plan that is being hatched. It is instilled within our being to be this way from the Garden of Eden ’til now. Even Jesus would do for you or tell you something to get a desired result further on in your life. That would also be categorized as conniving

Most people see Judas as a man who gave up Jesus for money and only money. He was greedy for a few silver coins, or was he?. A small amount for such a Man that would have bought a much larger amount, for sure. There had to have been a larger plan other than getting thirty pieces of silver. Thirty pieces of silver wouldn’t last long enough to be of much use. The ploy had to be of such a scale that Judas would take the chance of being eternally dammed.

I believe the untold story was a simple one. Remember, the people were angry that the Romans were controlling their lives in their country. They wanted them out but they were powerless. There wasn’t anything the people could do. Judas, being one of the multitude and a disciple, knew this and was frustrated but he had a plan. Jesus. He was considered a King among the people and the people were with Him. Judas wanted to end the Roman rule and force them to vacate the land since no one else would plus he would be one of the insiders. Judas had a plan, a big plan. But Judas either did not hear or didn’t want to hear what Jesus said. He told the disciples that He was going to His Father, etc. etc. The decision had already been made and a plan had been laid for Jesus to go through the terrible things in order to wipe mankind’s sins away and for mankind to start a new life.

Although Judas heard this, I am willing to bet Judas only had that one thing on his mind and only wanted one thing. Freedom from the Romans with Jesus as their ruler. He was thinking that he would give Jesus to the Romans and all he had to do was wait. He thought that if Jesus called out for help, the people would rise up and the Romans would be overwhelmed by the multitude of people rioting. The people would want their King back and the people would also have their land back. Then came catch twenty two or Murphy’s Law, whatever can go wrong will.

Jesus never called out for help from the people. He called to His Father and He asked for them to be forgiven for what they were doing. The people didn’t rise up and Jesus died, He went to His Father. Judas either did not listen and believe what Jesus said or he had been away from the people long enough that he did not know exactly what they would do. He found out the hard way what his mistake was and committed suicide. He did not want Jesus to die but to be freed by the people and the people to run the Romans home. Judas thought he was being smart and ended up screwing up.